It sat for several years under a pine tree before I got my hands on it, and I've gotten it back on the road! I'm chasing a slight stumble issue however.

From a dead stop, the car struggles to get started, but as soon as I get past that initial bog, it takes off like a rocket. Here's a list of what I've done so far for other reasons. The car didn't run when I bought it.

My fuel pressure hovers between 10 and 12 PSI, and it doesn't act like it's leaning out. It feels like it's an ignition/spark problem, but I don't exactly know how the system works. I do have a random misfire that occurs at all rpms under any engine load (in or out of gear, at idle or on the road traveling at 65 mph). I can see this misfire is spark related because with a timing light hooked up to the coil pickup wire (when performing "average timing" procedure), the light momentarily goes dark and a cylinder misses. When this misfire takes place while taking off from a standstill, the car will backfire through the throttle body. Otherwise it just stumbles.

Could this be a grounding issue? Does the distributor have a ground wire? Perhaps a main engine ground? The car has sat for a long time. It's definitely not a TPS issue as the throttle is very responsive while the car is in motion or idling. It's almost like too much advance is being given too soon, but as soon as engine rpm catches up, everything syncs back up and POWAAAA.

I'm totally wrong. I dunno how the advance is handled on this car, or if that's even the problem. Somebody was telling me that once upon a time that these ignition coils liked to arc directly to the block periodically, slowly burning a hole through the core of the transformer. Perhaps I'm seeing that? The only other key to this story is that I periodically get a Check Engine Light with code 35 while sitting at a light. It did that before I replaced the parts up front, and still does it now after all that work. Don't know what that's all about... Idles fine to me.

Haha heck maybe I'll try disconnecting the main harness from the ECU, cleaning up the terminals a bit and plugging it back in. Surprising how that action fixes problems sometimes. I don't mind just dealing with it, but I don't like backfiring through the throttle body. Makes me cringe.

The new ignition parts, are they a quality brand?

Spray carb cleaner around the throttle body base gasket, see if anything changes , a vacuum leak will bring up a code 35.

Also clean up all engine grounds and ignition connections.

Quality ignition parts? Hehe no not really. I bought 8mm wire and built the plug wires myself. Probably the highest quality part present under the hood lol... Parts are so terrible nowadays. Spark certainly seems like it's being dropped from the coil since I hook up my timing light to the coil wire. So I don't think it's the cap, rotor or the wires. I've checked inside the cap and at the rotor because I had read somebody was having trouble with a brand new rotor that came cracked from the box. The spark would travel through that crack and cause a misfire, but I don't see anything like that.

I have a sneaking suspicion that my code 35 is related somehow, so perhaps Doug is right and I am actually leaning out due to a vacuum leak... I'll check the entire intake and write back. I also have some new silicone tubing to replace the factory plastic stuff (it's so brittle) so I'll do that at the same time.

I thought you stated you replaced the vacuum lines so if not all of them, 35 could be a bad hose.

I went out and checked things out. I replaced those plastic lines. No change. So I got out the carb cleaner and started rooting around. I think I found a rather large leak between the intake manifold and... Dunno what to call it other than a spacer plate of sorts. It has some bracketry attached to it that hold cables and such. I just about killed the engine with one quick burst from the can. After that, I checked all of my vacuum hose connections, the intake manifold gaskets and the brake booster hoses. All of those seemed to check out fine. I am currently working at changing out that gasket to see if that fixes my stumble.

Alright I've changed that gasket, and I saw a huge improvement to throttle response. Awesome!!!

I can still get it to pop through the throttle body. The way the engine acts when this happens reminds me of worn distributor bushings in a distributor on an older vehicle. Could this be possible? Perhaps I should reset the ECU? I haven't done that yet.

As I'm taking off, it feels like I'm losing power, the engine *POPS* through the throttle body once, then takes off like it should. Other times (when taking off from a stop) it just feels low on power, then just randomly picks up and is all lively again. Most times, it's now responsive like it should be.

Reman'd distributors are quite expensive from what I've seen. Anything I can do to test the distributor? Or am I barking up the wrong tree still?

I am sure about those items, however I will still double check my entire ignition system just to be sure it's all fine. While I have the plugs out I'll do a compression check as well. We have the remnants of storm Nicholas blowing through now, but I'll write back once I have all of those checks done. I'll also go through the ground wires, wire brush the connections and make sure the cables are all good.

Took a nice long drive again, and I'm thinking I still have a vacuum leak somewhere. I got the code 35 again while idling at a stop light. I have made some definite improvements, but I still have a leak somewhere large enough to cause issues. I'm going to investigate the brake booster hose and intake fitting for the hose, as well as the cruise control module and vacuum reservoir. I know the AC controls use vacuum, and that there is a vacuum brake switch for the cruise control (I think?) If all of that stuff checks out, I might have to start to consider removing the intake manifold for new gaskets and to inspect for cracks.

Is there anything in the PCV system that I should worry about? It's there, but there are no hose clamps, the hoses all fit loosely together all over the place with the exception of the hose that connects the throttle body to the PCV valve. That hose seems to have been replaced, along with the valve at some point in the past. Still no clamps though.

Had to replace my pvc hose and clamp it, it was soft, replaced it 3/8 " fuel line hose.Check the pvc , make sure it rattles.....also try some Lucas or Seafoam in the tank a couple of fillups, could have a clogged injector.
Last edited: Sep 15, 2021

Is this a vacuum check valve? This was connected to my brake booster hose, but I can blow in both directions through it. 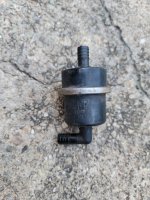 loud41 said:
Is this a vacuum check valve? This was connected to my brake booster hose, but I can blow in both directions through it. View attachment 6022
Click to expand...

Yes, it's a broken valve

Thank you! Bought a large booster check valve to replace it. Replaced the PCV valve and tubing. Ran out of light unfortunately today. In the morning I will search for any other possible vacuum leaks, then will move on to checking the plugs, wires and so forth.

Just to give an update- I've been driving the car, and it has been performing very well! Most of all that stumbling and coughing has disappeared. I still have the random misfire, but it is far less pronounced. At least that check engine light has disappeared. The throttle is very responsive, and I am absolutely thrilled. I have some Power Foam from Amsoil that I will run through the intake to try and clean up the cylinders a little bit. For now, I'm very happy with the way things are, and will post any updates if I make any improvements or discoveries related to this topic. Thank you guys so much for your help!

Your welcome, thanks for the update...,,