I have a 1997 Pontiac Trans Sport with a DRL daytime running light module and in case American Trans Sport don't have, this is a Canadian model.
Because I have DRL the signal lights in the front headlight pods are used to provide these lights. This module also allows the lights to act as turn signals while DRL function is enabled. My module is defective with erratic front signal light function while on DRL and isn't a problem when my automatic headlight option turns on the headlights ans disables the signal lights being continously on. Where is this module located so I can replace it and also find one at an auto wrecking yard? It is also discontinued by GM so locating a used DRL Module is my only option. 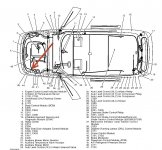 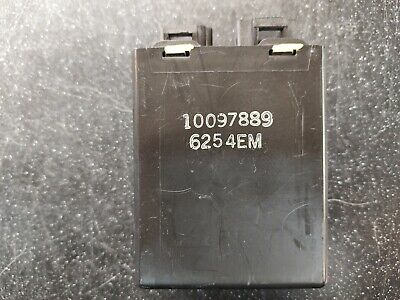 May fit other years and models. Make sure part # matches your old one BEFORE ordering.
www.ebay.com

The part number on mine as per calling a Pontiac/Buick dealership is10407669 and this particular module was used from 1997-2002. The module on Firebird/Camaro was located behind the radio but due to the HORRIBLE pictures in GM parts manuals they just show the bracket and the module. The parts guy at the dealership figures it is by the cluster or steering column. Off to the wreckers I go because it is erratic and has a mind of its own because most likely the IC chip on it is failing. If it was a relay it would have one light not working at all or dim. In Canada we have has this nonsense since 1992 and it is only in select vehicles in United States.

I got sick and tired of calling GM dealerships because the parts department cannot tell me where it goes and the service department's service manuals only go back to 2000 with limited information!
I called our local independent garage and they use All Data, a service manual company that you subscribe to instead of purchasing numerous paper book shop manuals. According to All Data they give a flat rate of 1/2 hour and mentioned it is located under the removable panel directly under the windshield where the auto headlight sensor is located and this removable panel is ahead of the bolted in dash that hangs over the instrument cluster.
Earlier I stopped by a wrecking yard and their staff don't remove a module like this and also didn't know where they are located. I found a Pontiac Trans Sport like mine and literally ripped the bottom cover off under the cluster, the cluster was removed exposing what was behind as well and I looked behind the fuse compartment covers on both sides also seeing nothing. Unless I knew where it was I would have spent hours searching and now I know it is supposedly located where I never thought to look!!
This kinda makes sense because on a Camero or Firebird along with Corvette and this includes American models BTW, their modules also the same part number are located in front and above the radio. These you have to remove the radio. As it turns out this is the general area on the Trans Sport and in the same area is the removable panel that spans from side to side. The radio on the other hand is farther down.
I will see what my panel is like to remove to see if it is there and if so head back out to auto wrecking yard and get one for $30.
A stupid module making things complicated to allow the constantly on DRL to also work as signal lights which they also are and then work hand in hand with the auto headlights and turn off the DRL when the headlamps are on. All this just for the sake of not having the headlamps on during the day and to have Auto headlamps.
Of course the DRL Module IF it wasn't discontinued would be $670 dollars Canadian.