Still in the process of installing the engine in my 1988 Sunbird GT. I've come across a problem with the cooling system. I have an Actron scan tool, and on cold engine start-up, CTS reads near ambient temperature. On startup, the temperature climbs normally until it gets to 122 degrees F and instantly shoots to 257 degrees, causing the cooling fan to come on. I've repeated this process several times and the temp readings are consistent every time. The problem is there is no way the engine is at that temperature - it's only been running for about two minutes. (BTW, I have only water in the cooling system until I finish exterminating the gremlins.) Yesterday, I tested the CTS sensors (the old one and a new one) on the stove in a pot of water using a thermometer and DVM and both sensors climbed smoothly in temperature and dropped in resistance accordingly, so I know they're good. Readings were very close to temp/resistance chart in factory service manual. I then used a potentiometer to "manually" send resistance readings to the ECM through the CTS sensor harness connector, and observed the same temperature spike behavior. Has anyone seen symptoms like this before and is it indicative of a faulty ECM?

No, I have the thermostat removed on my car to protect from overheating / cooking the head. My fan is on a manual switch because the computer never turned on the fan.

I learned that some of these 2.0 OHC heads had some bad casting problems with the heads being porous .... I'll if I can find the info on that.

Wouldnt help to find another computer to try or keep as a backup since these parts are getting scarce. 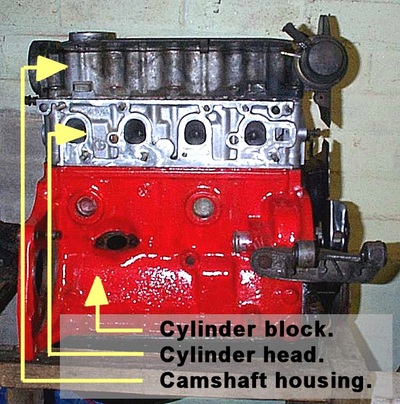 What is a Porous Head? The head of the engine (cylinder head as shown in figure 1 ) has small thin veins cast inside which caries water (the coolant) and the oil. This does two things. One is that...
topbuzz.weebly.com

Same companies that made our heads.. Dont know if you are getting combustion / exhaust hitting you temp sensor through a crack or not......

Hi Doug, thanks for your insight. I can appreciate your workaround - it seems like you've got a similar temperature monitoring problem. Acknowledging that would probably work for me as well, I'd still like to get my Bird as near to "factory" as possible.
This car has been sitting for over 20 years. It belonged to my son, who we lost in 2001 in an automobile accident. I'm trying to restore it in his honor. At the time, his engine was being rebuilt in a well-respected speed shop. I'd have expected the speed shop to have addressed any concerns about potential casting porosity at the time of rebuild. Also, I porosity or leakage were an issue, I wouldn't expect the symptoms to always be identical - to the precise temperature. Anyway, back to the history. I brought the engine home and it sat in my garage for a number of years before I even attempted to reinstall it. About two months ago I decided it was time to try to bring it back to life, so I started working on it again.
After a fuel pump replacement, fuel tank clean and flush, many replaced sensors, new battery and figuring out wiring and vacuum routing, it now runs and I'm just trying to properly resolve the remaining issues.
I checked it again today for temperature using my scan tool. It started at 75 degrees ambient. Before starting, I unplugged the CTS connector, and observed a reading of -39 degrees. I then shorted the connector terminals and got a reading of 304 degrees. Then I plugged it back in to the sensor, and started the engine and monitored the scan tool readout. It warmed up gradually to 123 degrees, then instantly shot to 235 degrees. I decided to let it continue to run, and the temperature continued to climb from there at a normal rate and topped out at 304 degrees (according to the scan tool). Of course, the fan came on and stayed on after the spike. Temperature gauge on dash seemed to be at about normal operating temperature by then.
I'd like to send you a rundown of all the data provided by the scan tool to see if you (or anyone reading this post) might have a little deeper insight into what's going on.

Oh, and yes, the cooling fan was on - had been on since the temp spike and never went off.

Sorry for your loss, our oldest son died in his sleep at age 24 and the last car he owned was a Sunbird also.

I never let the temp get past the first line , halfway is too hot for my old hoopty . About to add another fan up front for extra insurance. I find a light triggered when the fan is on helps alot in case it stops working

Alot of others have had this problem also , maybe just have another fan controller run your fan, and leave the factory stuff in place.

Easier just to hide a different controller box with piece of mind. All GM fwd cars had some kind of fan controller issues starting with the 80 Citation. Alot would still be on the road today if they would designed it better.

The AC compressor was off when you saw the fan was on?
T

Yes, A/C is not on, haven't even thought about that yet. That's a convenience that may or may not work. I've intentionally not added A/C into the mix thus far.
P

Interesting story. FWIW, when I run my ac no need to worry about overheating since the fan is always on. On my 87 Gt (non turbo) I have had working ac forever as it gets very HOT down here in FL.
T

I wanted to follow-up on this topic. I was about to order a replacement ECM (yes, they're still available at RockAuto), but decided to try a little more troubleshooting before doing so. I removed the ECM, opened the case, removed the MEMCAL chip, and the ECM circuit board. I inspected the chip, the circuit board and connectors and found no obvious areas of concern, so I reassembled and reinstalled. I then used my potentiometer (KOEO) to "walk" up and down the temperature scale several times up to about 260 degrees. Next I removed the potentiometer, reconnected the CTS, started the car, and amazingly, it now behaves normally (as far as controlling the cooling fan). It starts near ambient, heats up (steadily) at a normal rate until it gets to 229 degrees. The cooling fan then comes on, and runs until it brings the temperature down to 218 degrees. I let it cycle several times and tested again today from a cold start and all seems good. I guess I either had a poor ECM connection or I just had to reteach the ECM how to progress steadily through temperature readings. I hope this information proves helpful for anyone else struggling with cooling fan issues.
______________________________