I can't handle the list somehow.
only see the XA otherwise none of the numbers that match my engine and what they mean!
But I just believe you now
that it is a 1973 455cui engine.
thank's men

There was an "XA" block in 1965 for a 389 with a 3-speed manual transmission. But because of the date code showing the engine was made April 19, 1973 (D193) you should be able to see the displacement in raised numbers on the driver side of the block. It should be below the exhaust manifold and between the front of the block and an expansion plug in the block. You would have to get on a mechanics creeper and see it from below the car looking up. Those numbers would be in the 1973 block but not in a 1965 block. 1973 recycled the "XA" and used it to describe the 455 with an automatic transmission. Each of the numbers indicating engine displacement from the factory would be about 15 mm high by 10 mm wide and 3mm out from the block.
Last edited: Jul 19, 2021
G

That 73 455 is a better engine for todays fuels, lots of low end torque if built correctly. I would say it is a Plus Plus over the 1965 389, not that the original engine would be bad.

If it is a 73 455 it should have 455 cast on each side of the block drivers side just behind the fuel pump would be easiest to see. 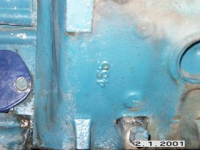 Also there should be a paramid shaped transfer lug on the rear of the passenger side of the block. This detail told the line workers the engine was not a 389, or 400 (those were the most commen engine sizes from 1960-1976) it would look like this. 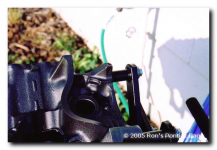 For comparision here is a 400 block without the transfer lug. You can see the area above the distributor mount hole is flat, in the picture above it has a raised protrusion about 30mm tall. 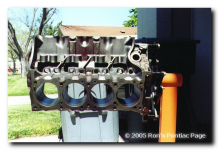 So a 389cui is already ruled out or am I getting it wrong?
To watch 455 in the block he has to get on the lifting platform which unfortunately I can only do in 2 weeks because I am injured.
if it's a 455cui from 73
is it a HO engine? with one-piece crankshaft oil seal?
greetz patrick

The date and the engine code rule out anything other than a 1973, 455.
It is not a HO or SD.
Factory Pontiac's never used a 1 piece rear seal.
Your engine is modified according to your believe it is a 462, so unless you have documents from a prior owner we can't tell what was done to it.
G

Not worse.
Not a stroker, bored for a larger piston.
Engine codes